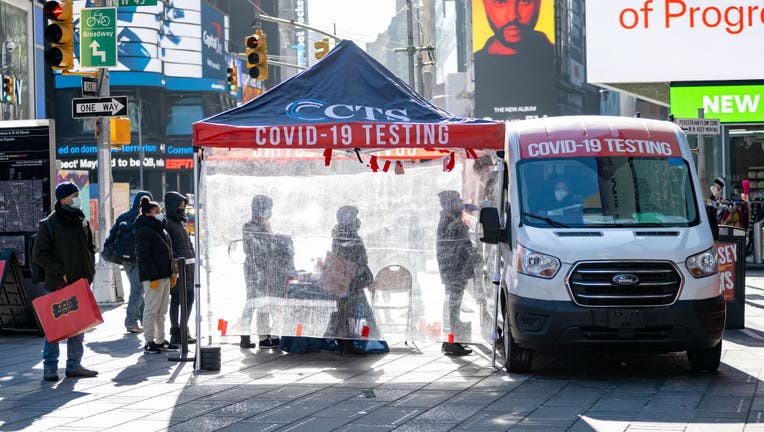 People stand in line in below-freezing temperatures to get COVID-19 tests during the surge in Times Square on January 11, 2022 in New York City. (Photo by Roy Rochlin/Getty Images)

NEW YORK – The omicron-driven COVID surge in New York appears to truly be on the retreat, as the latest data released by Governor Kathy Hochul shows that new cases across the state have dropped by almost half.

The state’s rolling seven-day case average is down 47.1 percent from last week, while new cases per 100,000 residents are declining in every one of the state’s 10 regions.

Hospitalizations are also on the decline, down 20.5 percent over the same time frame. Currently, 11,370 people are hospitalized due to COVID across the state, a 457-patient drop.

Deaths, generally a lagging indicator, however, are still holding near recent highs, with another 185 New Yorkers dying due to the virus.

Get breaking news alerts in the free FOX5NY News app!  |  Sign up for FOX 5 email newsletters

“Even as the rate of new cases continues to move in a promising direction we must remain vigilant against the winter surge,” Governor Hochul said in a statement. “While we are prepared to deal with whatever comes our way using the tools we know are effective, it will take a concerted effort on the part of every New Yorker to beat this pandemic. Continue to encourage all your friends and loved ones to get the vaccine if they haven’t already, get the booster dose, and wear a mask until we finally get through this.”

New York City, which was once the epicenter of the COVID surge in New York, now has the lowest rolling positivity rate of the state’s 10 regions at just 11.52 percent.

Is Sharing a COVID Test a Bad Idea, or Just a Gross One?

The Quandary of Polishing

The Mystery of Being with Kylie Unell

How to get rid of raccoons: humane, expert methods, plus smells they…